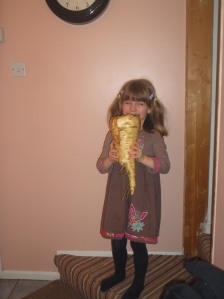 I am starting to realise there are some situations which make it almost impossible not to throw food away.

At the start of the month we had a birthday sleepover for a group of  8 & 9 year olds. Leftover party food is not very appetising the next day. Just as bad were the results of a group baking session. All those 9 year old egos doing battle for kitchen supremacy , wresting ingredients from each other’s hands and squabbling over who gets to break the eggs – fun to watch but very definitely a case of too many cooks spoiling the cupcakes. As far as not wasting food goes – well let’s just say the chickens had a party of their own next day.

Once I started looking properly was amazed at how much food we actually have in our house, in the freezer or in tins and jars or even still in the garden. The Ref found two whole rows of parsnips when he started digging the plots last week – the chickens must have eaten the greenery off the top and we kind of forgot they were there. I am thinking of maybe writing a book called ‘100 Interesting Ways with a Parsnip’ – this could be a follow on to last summer’s ‘1000 Interesting Ways with a Courgette’ … maybe.

I am also getting very possessive about my fridge, along the lines of ‘Who ate that old slice of bacon – I had plans for that!’ as my whole evening’s finely honed menu is thrown into disarray. Similarly I have had to get very dictatorial about shopping lists and things, as the Ref will insist on coming home with random ‘bargains’ he has found whilst popping into the supermarket on the way home to buy some essentials (well, okay, beer).

‘Look,’ he proclaims proudly, dumping a bag of sprouts and a slightly stale baguette on the kitchen worktop, ‘Half price!’ I am of course supposed to be pleased, in the same way as a Neanderthal* wife was supposed to be pleased when her husband dumped a bison carcass in her cave kitchen, I suppose. Although I’m sure she thought much the same as me, ‘Great, what am I supposed to do with that?’

Although he has now redeemed himself by making up a really great parsnip recipe (only 99 to go). Mash parsnips with cream and grated parmesan, sprinkle with breadcrumbs and a little more parmesan and bake till crusty  🙂

This afternoon I am making nettle soup. Because my daughter asked for it! Apparently I made it a couple of years ago and she really liked it.  Perhaps we could make some at her next birthday sleepover – now that would be fun to watch!